To be quite honest, mushy raisins give me the creeps. But dried raisins that are chewy are so delicious. It's something about the texture. Is there a food that makes you cringe when you think of biting into it, purely because of texture and not taste?

This bread is so rewarding. You boil raisins in a cinnamon sugar bath so they get soft. Then you sprinkle the raisins inside and on top of the bread. In the oven, the raisins puff up, then bake down and get back to their chewy texture. And, in the meantime, this bread gets huge and lovely! Try it. I'm enjoying the challenge of yeast and finding that baking is really easy to do while you're at home with family, watching TV, or doing laundry or other world-changing activities simultaneously! Multitasking has never been tastier. 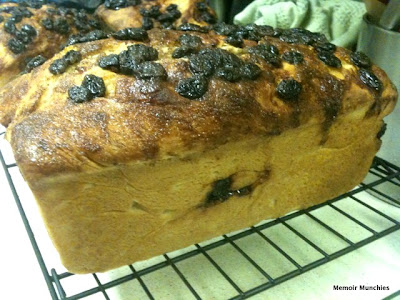 Cinnamon Raisin Bread
Simplified From The Joy of Cooking (75th anniversary, p 597-8)
Makes one large 9X5 loaf, but easily doubled
This classic bread was originally created by Henry David Thoreau, the noted author and philosopher. It is moist, spiced with cinnamon and great any time of the day. Dried cranberries can be used instead of raisins, if you like. 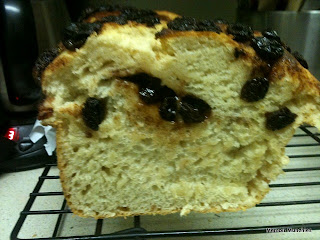 
1 Make the dough: In a large bowl (your mixer bowl works), combine 3 TB warm water and yeast. Let sit about 5 minutes, or until yeast dissolves. Then, add milk, butter, sugar, egg and salt. Mix (by hand or mixer) for one minutes. Then add 2 cups of flour. Gradually add 1 1/2 to 2 cups of flour until dough is moist but not sticky. Knead for 10 minutes until the dough is smooth and elastic. (Don't you love mixers for this part? If you don't have a mixer, I am thoroughly jealous of your biceps.)

2 Multitask: Move the dough to an oiled bowl and turn once to coat it with oil. Cover with plastic wrap or a clean towel and let rise in a warm place for about an hour, until it doubles in size. The warm place should be 75-85 degrees, without a draft. Now make the filling.

3 Filling: In a small saucepan on medium heat, add the raisins and about 1/2 inch of cold water. Bring to a boil, drain all but 1-2 TB of water, and add 1/4 cup sugar and 1 TB cinnamon. Stir until sugar melts. Grease a 9X5 bread pan. Punch down the dough and separate it into two pieces (per loaf). Put one piece of dough in bread pan and spread out. Layer 2/3 of the raisin mixture. Then add second piece of dough and spread out. Top with the rest of the raisins. Cover loosely and let rise until doubled in bulk, about an hour.

4 Bake: Preheat the oven to 375 degrees and bake for 40 minutes, or until top is golden brown. In the meantime...In a small bowl, combine 1 TB melted butter, 1 TB of cinnamon and 3 TB sugar. After taking out of the oven, brush with the cinnamon mixture. Serve warm, toasted or cool. Refrigerate or freeze after making. 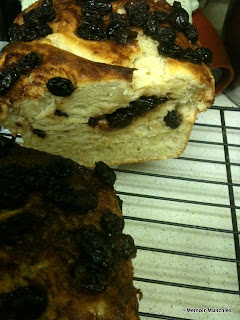 How great is this bread??? I hope you love it. Happy, happy day, friends.