The clock has just struck midnight and, as I will myself to go to sleep, I think about the veterans in my own life and those I knew of. My grandmother had a pack of brothers who served in World War II. One of my Aunt Ouida's 17 year old brother who died at one of the attacks near Pearl Harbor. My husband's dad served as well. I think of the names and young faces who are featured on the local news for having been killed while serving bravely. So many people neither you and I have ever even met, but they were important. They are missed by their communities, friends and
families.

I also think of one of the bravest soldiers I know that passed away this weekend.

My Uncle Jewel was truly a gem. His life could have easily been The Notebook or one of those other war love stories that makes you bawl and laugh at the same time. He was a soldier in World War II.

Uncle Jewel was a lot of things to a lot of people...a brother, son, uncle, husband, stepdad, golf buddy, fellow soldier, and friend. He was my grandmother's brother and the last of her 7 brothers to get married, in his 50s I think. He was handsome, a jokester and people flocked to his loving jokes and songs as much as they were attracted to his wife Ouida's Southern charm and amazing cooking.

Jewel taught my mom and her cousins all sorts of things, like how to swing a golf club, how to bowl, how to sing silly songs like Bill Grogan's Goat an Mares Eat Oats. Oh, those songs. Then he taught those same lessons to my generation of cousins. He made each of us feel so special. I have so many memories of times on the lake in Hot Springs, Arkansas, learning life lessons from my great uncle's stories while simultaneously swatting away mosquitos.

Jewel was a real golf lover and pretty darn good, from what others told me. He was kind of a legend when he was still alive, and I mean that people just loved and respected him so much. He wasn't always perfect, but I can't think of a thing he ever did wrong either. Last July, my mom and I flew to Mississippi for the day, to go see Jewel and Ouida. The effects of Alzheimer's were certainly setting in; you could see it on his face. But his stories of old were still clear to him. My Uncle Max (his brother) sent us with a copy of one of Jewel's military award descriptions. I read it aloud to him, and Jewel recalled that day very clearly. The day he saved a group of men, saving their lives from certain enemy fire and death. That day earned him a Silver Star, an incredible honor. Jewel just smiled and said, "Yep, that was a tiring day." No kidding.

As you go about your week, I hope you're able to think about people like Jewel who helped shape you into who you are. Sometimes it's necessary to look back and swim in gratefulness for the gems that taught us what we know and those who positively encouraged us. I am thankful to be a niece to some incredible men and women, some who have passed and some who are alive and well. Either way, I thank God for the heroes and heroines (military and civilians) who allowed me such great freedoms. I also thank them for teaching me life lessons that I depend on daily.

May God comfort Jewel's family and friends, and may we see the beauty in celebrating lives who have passed. Goodnight and Happy Memorial Day.
Posted by Laurel No comments: Links to this post

Israel Photos and Some PDX Places

My mom and I went to Israel in March...I've finally gotten the photos up.

And on to some Portland stuff...

Matt & I saw Jim James (of My Morning Jacket, etc.) on Tuesday...fabulous funk fantastical. And Crystal Ballroom is a pretty fun venue...I'd never been there before but have driven by it 176.8 times.I can't prove it, but Abraham Lincoln must have danced there at one time. The giant ballroom is antique and has a foggy aura in the room...and the wooden floors shake when everyone is dancing. I kind of loved it. It was also refreshing to be in a venue with a split room--one side for under 21 and one for 'grownups.' We didn't know that was the case and spent the first 1/2 of the set on the kiddie side. Let me tell ya, they were some of the most courteous show-goers I've ever been around. They weren't drinking...refreshing. I've been to a lot of bars/venues in the last 10 years, and I was impressed.

We went to Portland Farmers Market on Saturday at Portland State Univ (central Portland)...so many booths, farms and small business represented! But our noses took us here... 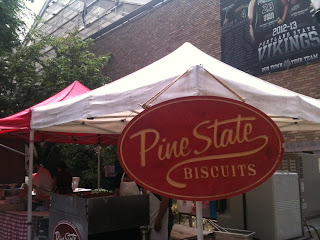 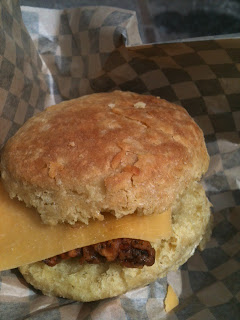 AND we ate this beautiful fried chicken and cheddar biscuit. I could only eat half of it as it is huge and rich. But it was so tasty. Here's a feature of Pine State on Food & Wine. 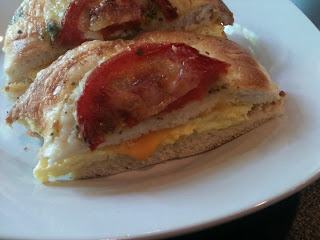 Later in the week, my friend Brooke and I went to Portland Bagelworks. I heard about this place a couple of years back...it's a cute place! My egg sandwich on a tomato basil bagel hit the spot. It's not the best I've ever had, but it was darn good. 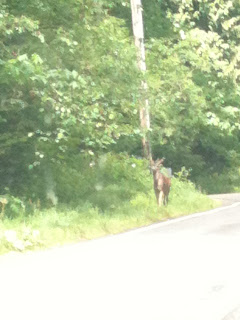 And I found a rose near our house that I didn't have to pick...it was broken off, so I won't feel guilty. 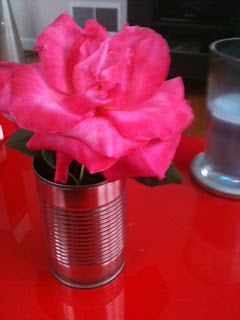 And I enjoyed Mother's Day with my guys. I'm not a mom yet, but Sam's good practice, I think... 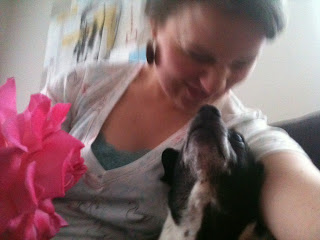 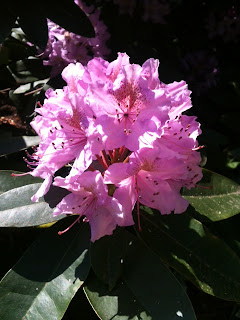 Laurel
Posted by Laurel No comments: Links to this post

I'm a sucker for pasta. Pretty much every kind I've tried. There's something really wonderful about Italian food...
So let's share some shells...
Stuffed shells were a treat in college. Living in Boston and having a tight budget, ordering Italian takeout was a treat. It was especially good because I don't think I ever had REAL Italian until moving to Boston. And there are a ton of great Italian places in the city...mmm, it makes my mouth water just thinking about it. One of my roommates turned me on to stuffed shells. They were humongous, full of melted cheese and had this amazing sauce. The flavor was spectacular!

So here's my first shot at making the home-version, which has a LOT less fat but hopefully is full of flavor still. This one uses jar marinara but, if you have time/access, I strongly recommend fresh sauce and fresh basil. Yummm.

32 shells + 2 quarts water + large pot + dash salt
step one: In a large pot, bring salted water to a boil. Let pasta cook according to instructions on package. Once the shells are cooked, drain the water and lay the shells out in one layer on a dry towel. Set aside.

3 cups marinara + 9X11 baking pan + 8X8 baking pan + non-stick cooking spray
step four: Spray each baking pan with spray. Preheat oven to 375 degrees. Spread 1/2 cup marinara in the bottom of each baking pan.
step five: Using a spoon, stuff 2 TB of cheese mixture into each shell and place opening-down in each pan. Repeat the process until all of the shells are stuffed. [20 shells fit in the large pan and 12 fit in the smaller pan!]

1/4 cup parmesan + 1 1/2 cups 'Italian blend' shredded cheese [use mozzarella, more parm, pecorino romano, or your favorite cheese blend] + 1/2 cup Italian breadcrumbs [optional]
step six: After all of the shells are stuffed and arranged in the pans, pour the remaining 2 cups marinara over the shells. Sprinkle cheeses over the top and breadcrumbs [if you want a little extra crunch]. Bake for 30 minutes.

There you have it, stuffed shells! Serve with steamed veggies or a giant salad on the side. Enjoy the flavor without all of the takeout guilt. :)


Happy eating!
Laurel
Posted by Laurel No comments: Links to this post