Wow, what a weekend.
It was busy and fun and even relaxing. Here's a recap:

FRIDAY: After work and cleaning, we made shrimp risotto (much better than my first attempt) and listened to Billy Joel's Greatest Hits on vinyl (thanks, Matt!) while it cooked, in 30 minutes flat. (Recipe later) After the risotto and NYC piano man, we went to Karaoke at Uptown Bar and Grill. It was fun, and my throat hurt the next morning haha. Uptown was a bit of a dive (which doesn't stop me), and the people were pretty awesome. The DJ reminded me of my cousin Jeremy, if Jer grew out his hair, dyed it black, and started wearing eyeliner. Just saying. We'll prob go back there at some point, since it was so chill. Then we went by Velvet Taco for a second dinner. It was delicious but we underestimated the spicy sauces...whoa! I had the bfast tacos--applewood bacon, garlic sauce, homemade potato crisps on top, cheese, potatoes, and a flat fried egg. Matt had a calamari and a shrimp taco...fancy pants. 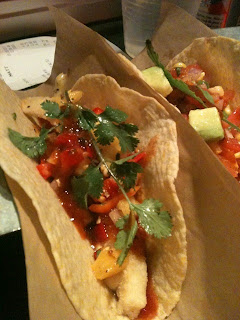 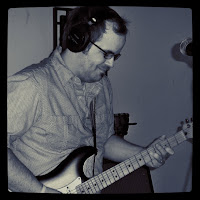 SATURDAY: Matt's first gig this year was Saturday night, and he did a timeline of songs he's written over the last 15 or so years. He started with some old ones and went from there. I've gotta tell you, I'm so proud of him, and it's fun to hear how his music and writing have evolved over the years, particularly over the last year or so. He did a great job. We met some neat guys (Pearl Jam people) and had some good food/drinks. I was at church all day, and this made for a relaxing night.

SUNDAY: Church, meeting, and home. We tried out a new grocery, Sunflower Farmers Market. They were a bit like Trader Joe's, a no-frills, non-stuffy healthy foods grocery store. The prices on produce were really good, and I liked the mixture of organic and conventional. Also, their bulk items (particularly whole grains and flours) were much cheaper than the "other guys" (Central Market, Whole Foods). We'll def go back here. 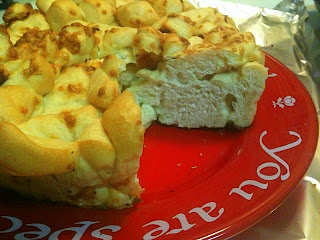 We got this fun bread for $1.50...any place whose motto is "Serious food, silly prices" is a friend of mine. Sunflower is only 10 years old this year, so I'd say their 35-store chain is doing really well! Anyhoo, this pull-apart bread is in the style of Monkey Bread and this one is Pepperoni Parmesan. Yum. And with dinner came Quorn breaded chik'n with gruyere (Double Yum), which I've mentioned in here before and some roasted eggplant on the side. 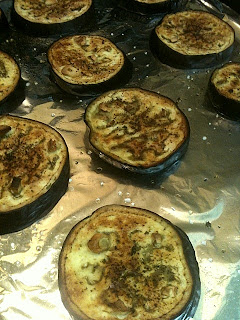 Roasted Eggplant
A cup of raw eggplant is beautiful, spongy, and 19 calories. It has a nice amount of soluble fiber and manganese, and is thought to be good brain food. This dish is great as a side or on top of greens as the "meat" of a salad. Crisp on the outside and soft in the middle, roasted eggplant is a mush-less way to enjoy this beautiful purple veggie.
Makes 4 servings, but easily halved, doubled


Directions
1. Line two baking sheets with foil. With a brush or your hands, spread olive oil over both foil surfaces. Preheat oven to 425.
2. Lay eggplant slices evenly onto baking sheets. Push a few garlic pieces into each slice, then brush olive oil on top of each slice. Season with salt and pepper and optional other spices.
3. Bake for 12 minutes and take out of the oven. Flip the slices over and salt and pepper the upturned sides. Bake for an additional 12-15 minutes, or until slightly browned (you'll see the veins in the slices, which looks pretty neat). Serve warm.