Ever seen this documentary?

Fat, Sick and Nearly Dead is a documentary by a guy who's never done a film. He is overweight, has a skin disorder because of his cheeseburger and french fry diet, feels sluggish and knows that his lifestyle of fast food and long work hours will lead to an unhappy death eventually. SO...he does something many will find extreme. Joe the Aussie goes on a 60-day juice fast, eating only fruits and vegetables that he prepares through his juicer. He spends the first month in NYC and the second month driving around the U.S. to find out how people eat and if they'd be willing to try a 10 day juice fast to "jumpstart" their bodies.

I really enjoyed this film. 1) It was free on Netflix.  2) It reiterated to me the importance of eating fruits and veggies and the foods that are unprocessed. Joe's physician monitored him the entire time, and it was fascinating to see his weight drop, skin glow and clear, energy increase, prescriptions decrease and then stop altogether, and his sickness go in remission. Joe met a lady on his travels that was willing to try the juice fast (although apparently this "fast" is really filling) for 10 days, and it really decreased her migraines to the point where she had none at all. She continued to do the 10 day fast once every 3 months, to "reboot" her body, as Joe called it. Joe also helped a guy with the same health condition he had, except the truck driver he met was about 450 pounds. The film took you through the incredible life-changing of this man as he got healthier, found a way to help others get healthy, and he was able to play baseball with his young son for the first time. So neat!

I am not at all a fan of fad diets, but fasting is so deeply rooted in the history of nearly every culture and religion that it is worth taking a look at this, if fasting is not already a part of your life. Juice fasting gives you all of the nutrients that you need (hence Joe's being able to juice fast for 60 days) and reverses many of the side effects that our American processed foods diet enables. If you're interested in learning more about this film or fasting, check out the website, where there are some good resources.

Now let's get to the food! I tossed all of this in a blender and sipped while watching...of course, it's inspired by the film! 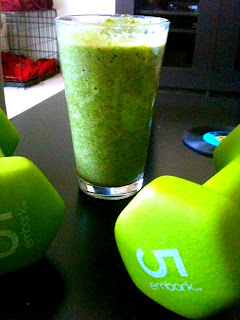 
Toss all ingredients into the blender. Blend and drink. Mmm.


Grapefruit is not my favorite fruit...oh, how I wish I could eat it without a boatload of sugar on top. Wait, now I can! This smoothie is a bit sweet and has the taste of grapefruit without the bitter face. Hope you enjoy.