Sweet, Spicy and Minty? Oh, My!

Grilling is always good, but sometimes it's nice to grill under air conditioning! 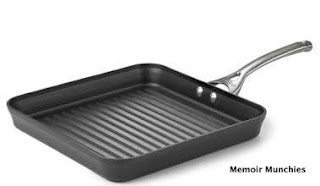 While NOTHING replaces the the genuine, masculine grill, the grill pan is a great alternative when you crave cool air and being in the kitchen, rather than than lots of sweat and bug bites as outside souvenirs. Our engagement present from the Cluthes (my in-laws) was this amazing Calphalon grill pan. Honestly, I thought it was a generous gift, but I had NO IDEA HOW OFTEN we'd use it! (Thanks, family!) It is so versatile:
seafood
chicken
beef
pork
veggies
fruits
polenta

Sweet, Spicy and Minty? Oh, my! 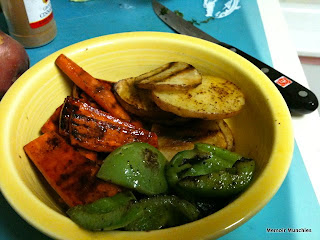 I was just experimenting, but these worked out well. You can use your favorite veggies (bell peppers, carrots, potatoes, corn, squashes, tomatoes, etc.)
Grilled Veggies with 3 Flavors
Serves 6 one-cup servings, but easily doubles or triples. Heat pan to medium-high heat. 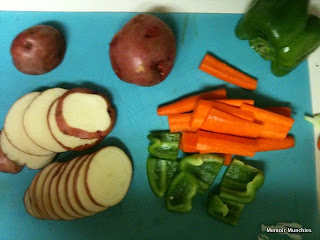 1) CHOP
1 green bell pepper, sliced into large bites
2 carrots, sliced in half or thirds lengthwise, then in half again (reducing thickness of carrots)
4 red potatoes, sliced into 1/4 inch chips

2) FLAVOR
In a large bowl, toss all veggies in olive oil and a pinch of sea salt.

2A) CARROTS (SWEET)
In a smaller bowl, toss carrots in 2 TB brown sugar and 1 teaspoon of cinnamon. Make sure all pieces are coated. Place the tossed carrots on the grill pan, one layer deep. Rinse out bowl to use on potatoes.

2B) POTATOES (MINTY)
Chop 3 TB of fresh mint + a pinch of sea salt and toss potatoes with mint. Add potatoes to the grill pan, in one layer.

It might take a couple of rounds to get all of the veggies grilled. When you do so, it will take 5 minutes on each side before flipping with tongs. Cook until the veggies are slightly soft on the outside but not overly charred.

I ate this as an entree, which would be good over rice. It works well as a side, too. Bon appetit! 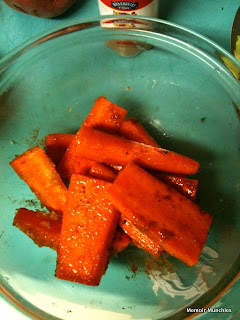 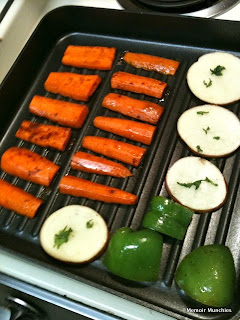