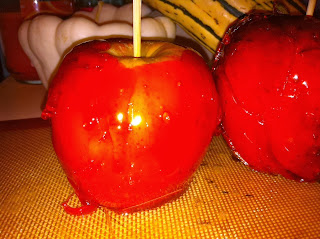 Halloween has come and gone, but the apples are still plentiful. And Christmas season is coming to an end (tell that to every retailer, heh), but does cinnamon ever really go out of season? I think not.

Granted, the three most used words on this blog are "easy," "banana," and one more...you guessed it...CINNAMON. Ah, cinnamon. I find any excuse to sneak it into a recipe. Mostly in breakfast dishes and baked goods, but sometimes an entree or hearty sauce, too! And why not just out there, in plain sight, coating an apple?

Cinnamon Candy Apples
Using cinnamon hard candies makes this treat a snap to make, plus the cinnamon soaks into the top layer of the apple flesh. Yum. 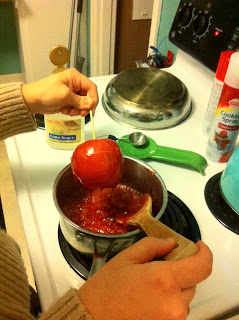 Prep: Lay out a sheet of parchment paper sprayed with nonstick spray or a baking liner on the counter. Carefully insert a skewer or popsicle stick into each apple.

Step 1: Spray a small pot with cooking spray and toss in the cinnamon hard candies. Stir in the light corn syrup.

Step 2: Heat over low-medium heat until mixture is bubbly and the candies are melted.

Step 3: Quickly dip each apple into the cinnamon mixture to coat. Use a spoon to coat each apple entirely. Immediately place the apples on the wax paper and let cool for 30 minutes. The coating will turn back to its hard candy form...take care not to break a tooth while devouring the spices-y awesomity!