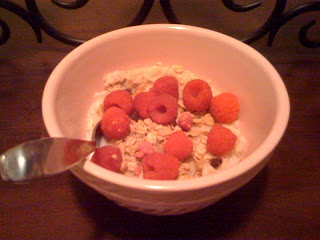 It's 1:23 in the p.m., and I just had the most amazing breakfast. Yes, I've been up for many hours (okay, several because I worked late last night)--reading for class, working out, cleaning up a bowl I broke--which was also full of boiling hot oatmeal--and reading some more.

So my most perfect breakfast did not involve a single drop of syrup, not a mile-high stack of Breakfast Klub pancakes and no applewood smoked bacon...a shocker to all of my family and friends! I had homemade oatmeal sprinkled with slightly sweet raspberry granola, topped with perfectly ripe raspberries for the finish. It was simple, healthy and filling. It's nice to know that someone like me, with a HUGE sweetooth, can enjoy this not-so-sugary treat. 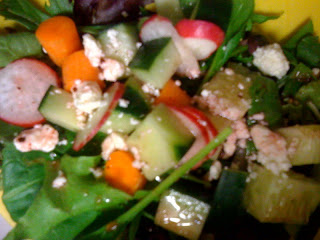 Dinner 2 nights ago...big salad, lots of veggies...
when you regularly buy produce (& intentionally
spend more than 2 minutes in the produce section
at the grocery store, not just in and out with bananas
and a couple of baking potatoes!), you tend to
incorporate it into whatever you're doing.
Now I didn't PLAN to make a salad that night...I just
asked Matt to pick up some lettuce when he got the pork
tenderloin and -voila!- I had all of the other "salad stuff"
in our fridge...cucumber, radishes, carrots, tomatoes,
black olives, feta cheese, a homemade balsamic
vinagrette. I was fixing a healthy salad/meal and using
stuff I already had (being thrifty, always good). Try it! 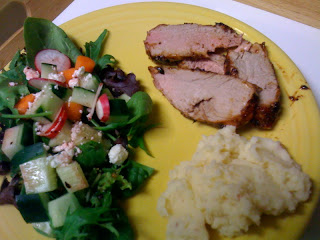 Matt's delicioso pork tenderloin, some mashed
potatoes with kick, and the salad was my
main course. Soo tasty!!

I had to be at work at 5p, so I made this sauce
beforehand. Matt always makes our pasta sauces,
but it was my turn this time. Of course, since I'm
more of a veggie lover than a carnivore (and my
stomach reminds me through pain when that
triple cheeseburger is in sight), tons of veggies
were chopped in...

Green bell peppers, onions, zucchini, carrots,
edamame...(everything but the kitchen sink and
--once again--using whatever produce I have
lying around in the crisper).

Then came the simmering sauces with ground turkey,
canned and fresh tomatoes and LOTS of spices. 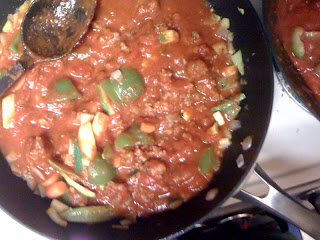 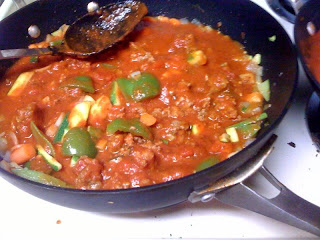 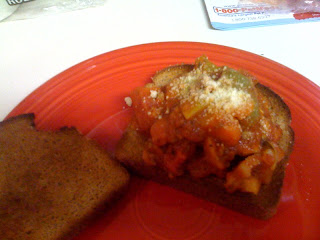 and, by that point, I was impatient and just topped
the sauce on a piece of whole wheat toast. Who knew that I wouldn't even miss the pasta? So that's all for now. Once I get pics back, I'll post my parents' 30th Anniversary Dinner. It was so much fun! Adios!
Posted by Laurel